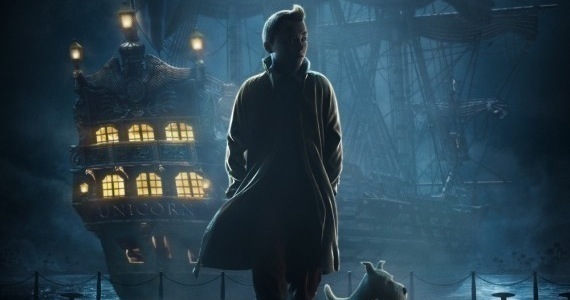 As I start writing this piece, I realize that this is going to be the most difficult page and a half of my life. As a matter of fact, I can’t review this film in an unbiased manner considering my more than sacrosanct acquaintance with those 62 page scriptures. So I am just listing out a few points that I feel are worth noting, not necessarily in any order,

It was a delight! Despite the cutting edge technology being used, the animated title sequence looked vintage and straight out of the comic strip. The classic Tintin font for the credits, silhouettes of the journalist and his canine companion, tribute to most of the staple elements of the series including the moon rocket, everything was pitch perfect and looked like a real and heartfelt tribute the master rather than a mere attempt at building another billion dollar franchise. I know Spielberg loves Hergé and it showed. I was only hoping the film to not fall short of the standard set by the opening sequence as it did in case of X-Men Origins: Wolverine.

Now, the most important thing a hardcore Tintin fan must note is that the story is remixed and enhanced one and if you are looking to watch each and every frame of the book to come alive, you will be disappointed. As I noted earlier in my anticipatory post, the story was supposed to fuse three adventures, The Crab with the Golden Claws, The Secret of the Unicorn and Red Rackham’s Treasure. But as it turned out, bulk of it follows the one in Secret of the Unicorn. Some parts of The Crab with the Golden Claws have been used, mainly to introduce Haddock and establish his character. I believe the only reason to do so is to help the poor kids who have never read Tintin, understand the origin of Haddock and his chemistry with Tintin. Similarly, Red Rackham’s Treasure has only been used to achieve the logical conclusion. Rest of the story mainly follows with the Unicorn storyline with some major tweaks and additional events that mainly provide an opportunity to stage more action and chase sequences.

As I’ve now mentioned the action part, I have to say that while Spielberg is sincere in his tribute to Tintin, the director of Indiana Jones was looming large over the Belgian maestro. It starts like a classic thriller but the action comes thick and fast with wanton destruction of public property which is an apt display of Hollywood muscle power as well as the difference between their craft and that of a classic European work of art. Nevertheless, the chase sequences provide most of the enjoyment in the film. Especially the long drawn chase scene involving all the major characters through the narrow lanes of an African city and also the Francis Haddock and Red Rackham’s fight are some of the most exhilarating action sequences in recent times.

The major characters are true to their original selves. Excellent casting means that Jamie Bell, Andy Serkis, Nick Frost and Simon Pegg bring the familiar characters alive to a great extent. But elevation of Sakharine to the role of main villain, his backstory and complete elimination of the Bird Brothers is what is going to divide the fans. Nevertheless, Daniel Craig is more than effective as the villain and makes up for the disappointment. Another disappointing aspect is the absence Professor Calculus. The writers have plugged in Bianca Castafiore (I must agree that she’s been used well in her cameo) although she wasn’t there in any of these three adventures in question while Calculus should have been rightfully there, Red Rackham’s Treasure being his debut adventure. Nevertheless, the writers have done a great job in recreating the humour of the original series. While they have added some new situations and dialogues, they never betray the established traits of the characters, nor do they look forced or desperate. The drunkenness of Haddock as well as the bumbling nature of Thomson and Thompson has been used to good effect. Coupled with great performances and animation, the humour keeps people entertained when there is no action. 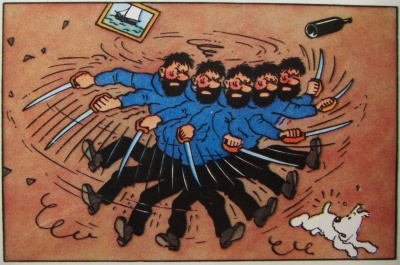 Now, I do not have any empirical data but I’m sure Captain Haddock is the most popular character in the entire series. It is he who has a backstory while Tintin remains the supposed journalist who is never seen writing anything or meeting his editor. That is where Andy Serkis does a great job in transferring the manic energy of both Archibald and Francis to the screen. As an old fashioned prick, I would say that I still prefer to read through Haddock’s curses than listen to it. Nonetheless, I think the success of this entire project depended on how effective Haddock was and thankfully the film doesn’t disappoint on this count along with the animated Snowy/Milou.

So, eventually it turns out be an enjoyable experience even if some items from my wishlist were missing. The animation and production values are terrific, but then it is only expected from a film produced by Steven Spielberg and Peter Jackson. They have tweaked it to some extent mostly to fit the requirements of a high value Hollywood production. But it is a relief to see that the original spirit of the series has not been tempered with. The next film is supposed to deal with The Seven Crystal Balls and The Prisoners of the Son, two of the fines action adventure comic books ever created. The long wait starts now!