Spoiler Alert: This is not a review. This is just a bunch of jumbled thoughts. Sensitive young souls who are still planning to watch the film… read no further.

Long wait for a film getting elongated by circumstances is not new to me. In 2009, I had to wait one week extra for Vishal Bharadwaj’s Kaminey because in western India the release was delayed by bird flu scare (or was it the flying pigs who decided to flu?). I was burning my ill-gotten calories in the Himalayas when Inception released in 2010 (along with Udaan & Tere Bin Laden). When Shaitan released in 2011, I was slacking in Guwahati, a place where limited budget films are bound to get limited releases. Continuing the tradition, I was ogling at multitude of women of confusing ethnicities in Goa when Agent Vinod released.

So, the first thing I did on my return was to book a ticket for the film although by that time the negative vibe was visible everywhere. I had to catch it because whether good or bad, Sriram Raghavan returns only once in 4/5 years. Now, having watched the same, I’m facing a severe dilemma which is not due to the quality of the film but due to my inability to guess the intention of its makers. This is exactly why I am rambling here even though nobody cares about my ramblings. I must express my confusion to get over it and do something else. But before that, let me share a few observations to clear the air. 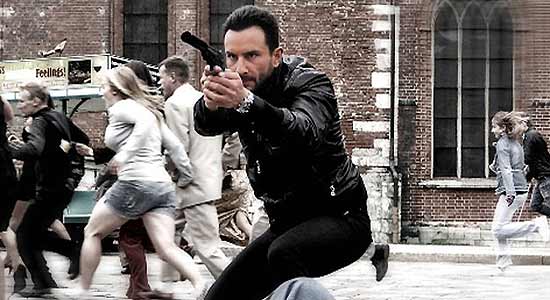 • I still think Agent Vinod was a good film, at least 70% of it. The remaining 30%, as you can guess, mostly include the last few reels of the film. While the build-up is decent, eventually the plot turns out to be a done to death one.
• The opening credit was good but I do not think it was worth all the hype. It was just good, not great, including the BGM.
• Dialogues are consistently witty but sadly out here loudness is always preferred over sharp and clever wit.
• The smart parts are occasionally ruined by subsequent spoon-feeding.
o “Yeh Rubaiyyat darasal ek detonator hain”! Was it really necessary to underline, embolden and italicize the obvious?
• Exotic terrains were explored but not fully exploited in the film. Otherwise why get back to the same old Delhi for the climax when you had the Trans-Siberian railway, Sub-Saharan hinterlands and the Helmand province at your disposal.
• It pulls off one of the best long shots in Bollywood. Not sure if they used some trickery to make it look like one shot. Even then, the job is well done.
• Also notable is the parallel flashback scene involving an LTTE guy with Rakkama Kaiya Thattu playing in the background (I remember the Hindi dubbing of Thalapathi where the song went like Janeman Aja Aja…)
• Turning the rich guy into the villain is as clichéd as it gets, but it prevents the other cliché that is blaming everything on the “parosi mulk” (neighboring country).
• Whatever it is, Agent Vinod is a cool spy because he can pull out hot Middle Eastern woman out of a dirty sack like a magician pulls out the proverbial rabbit.

Now, coming to the business end, I think the mass negativity around the film is a result of its confusing tone. I think so because while it does not scale the expected heights, considering the type of “blockbusters” we’ve had in recent times, a disappointing climax cannot be the only reason for such hostility. So what exactly is Agent Vinod?

A big, racist Camel Joke?
• Personally I wouldn’t mind the same. I’m not sure how many people have seen the OSS 117 series by Michel Hazanavicius and starring Jean Dujardin (The guys who made The Artist). The OSS 117 films also spoof the genre. Not exactly laugh riots but they maintain a wickedly entertaining racist tone throughout. Two third of Agent Vinod somewhat falls in the same category. Eccentric villains played by good actors are introduced in gay abandon and they manage to amuse rather than scare.
• Shahbaz Khan shows up after a long time (Do not remember his last appearance but still remember his costume epics in DD). Ram Kapoor gets a break from innocuous hosting duties of discredited “Swayambhars”. Adil Hussain gets some well-deserved screen space (In the suave zone of Danny, not that of Amrish Puri).
• But above all, veteran Prem Chopra plays a wealthy Sheikh who loves his camel more than anything else. And finally towards the last reels when the film moves dangerously close to the glycerine soaked ending of Anubhav Sinha’s Dus (2005), who saves the day? Yes, the dromedary!

A Bond clone with an umbrella reference to the master of referencing?
• Hopefully this is not the case because if so then it fails on both counts. Neither the action achieves the high of a Bond flick, nor does the referencing achieve the finesse of Tarantino. Raghavan himself has done better work at referencing in his previous films.
• Bond is not only about style but also about high voltage action accompanied by wanton destruction of public property. Agent Vinod, like many other recent Bollywood films, prefers rapid editing & CGI over real action. In fact, I think Gadar was the last satisfactory Bollywood action movie, at least for me. Coolth cannot replace the impact of a raw punch by a real son of the soil. Dhoom series, Krishh, Don etc. made the same mistake and sadly Agent Vinod also continues the same.

A bridge to assimilate the “classes” and the “masses”?
• This seems to be the most clichéd but also the most potent possibility. While the director could not let go his own sensibilities, with a huge budget they had to make it more acceptable to the dreaded “masses”! I wish they’d cut down a few locations, reduced the budget and experimented more with the content.

Now, I’d like to point out a few questions that are playing with my mind. These are about real and perceived references in Agent Vinod. In a film like this, it is easy to spot references even when there is none and that is what causing me all the trouble. Some of the references including that to Leone (Sergio not Sunny) are obvious and there is no need to reiterate the same again. But there are some others that I want to be clarified,

PS: I do want the makers to work on a sequel/prequel whatever it is with more serious action and a less clichéd McGuffin.