This article was originally published in the December Issue of Eclectic Magazine. The writing commenced in October, anticipating the release of The Rum Diary, although the film was already released by the time it was published. 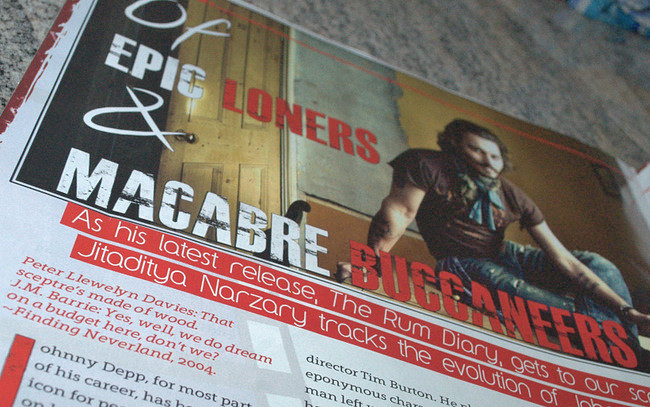 Johnny Depp, for most part of his career, has been the icon for people who dream on budget. With his early success in television as a teen icon, he could have become another megastar in the 90s with his contemporaries such as Cruise and Pitt. But instead he turned out to be the icon of cult eccentricity for more than a decade before finally moving on to become the box office phenomenon through The Pirates of the Caribbean series. Only Robert Downey Jr. to some extent can match Depp in this sudden transformation from a powerhouse performer to a box office magnate. So, as his next film The Rum Diary is about to release, let me glance through his illustrious but constantly morphing career.

When I think of it, my first Depp film was Sleepy Hollow and I did not even know who he was at that point of time. He was not a major star, at least in my part of the world and I do not even remember seeing his photographs in the newspapers. Things changed after he turned Jack Sparrow but I saw Depp’s first entry into cult superstardom Edward Scissorhands (1990) much later. Nevertheless, this was the film that marked the start of his long and enduring collaboration with director Tim Burton. Here he plays the eponymous character who is an artificial man left with scissors instead of palms as his creator died before his completion. Depp’s portrayal of this epitome of imperfection set the tone for rest of his immediate career inundated with oddball characters. Edward is as imperfect and abnormal as Frankenstein but he is not a threat to the society. He is good natured and gifted in his own way. The society does except him but only with a sense of curiosity and amusement. He longs for acceptance and love but discovers the curse of being different in a stereotypical society. Although it is surely an exaggerated fantasy, I couldn’t help but relate to the man constantly ridiculed by the society only because he was unlike them.

Most of Depp’s characters after that ended up as the victims of social stereotypes. By the time they shot Edwood (1994), Depp had become the simpatico actor for Burton, much as De Nero once was for Scorsese, albeit in totally different genres. Edwood showed how much Depp can delve into a character, especially as he portrays a real man who was ridiculed throughout his life for his incompetency. Depp made Edward D Wood Jr. look hilarious and endearing with a melange of innocence and joie de vivre but never allowed it to become a caricature that it could have been. Be it in his enthusiastic encounter with his idol Orson Welles or his interactions with Bela Lugosy, Depp’s Edwood never fails to exude that childlike enthusiasm even in the face of abject failure. I’ll always remember those scenes of Edwood working on “so bad that it’s good” films like Glen and Glenda and Plan 9 from Outer Space with a glee unmatched and passion unsurpassed. I wondered how someone can be so ignorant of his own shortcomings and as I explored more about Edwood, the person, I realized how effective Depp was.

During this period, Depp also worked in two lesser known projects helmed by two maestros of world cinema. In Emir Kusturica’s Arizona Dreams (1993) Depp plays a comparatively normal character of a young man smitten by an older woman as well as tormented by recurring dreams. The film contains staple elements of Kusturica’s films including gleefully bizarre surrealism and cinephilia and Depp was probably the only major Hollywood actor who could have seamlessly blended in this typical European affair set in an American backdrop. It was a role reversal for Depp. He gets to play a normal young man compared to his most previous roles but the trademark surrealism of Kusturica keeps it far from being banal. I have long been a fan of Kusturica but I watched Arizona Dreams only after I’d seen most of his Serbian films. So, my expectations were mixed as I feared his real charm to be ruined by Hollywood glitz. But Depp was there as the director’s actor. Most other mainstream Hollywood stars would have looked more absurd that the concept of the film itself.

Depp’s indie credentials were boosted further when he appeared in The Dead Man (1995) by Jim Jarmush, the patron saint of indie cinema if there ever was one. Here Depp plays a gunslinger called William Blake, gets transported to the wild west, burdened by expectations of his companion who thinks he is a reincarnation of the poet William Blake. He again plays a loner here who pops out of nowhere and travels towards nowhere. He gets himself into trouble with his new employers, gets chased by all and sundry and strikes an unlikely friendship with an Indian called “Nobody” (Played by Gary Farmer) with eclectic tastes. It is a film where one character keeps uttering “Stupid f***ing white man” and reverses every trait of the classic westerns. For a film that is irreverent towards the very genre it belongs to, there was a need to have a non-conformist in the lead and that is why Depp was probably the only choice for this role.

Towards the late 1990’s, Depp kept playing character driven roles, especially in biopics such as Donnie Brasco (1997), where he plays an FBI agent who infiltrates into a New York crime family. Brasco was a mainstream biopic with crowd pulling elements such as the mafia and the cops. Of course the film is also memorable for Al Pacino’s uncharacteristically vulnerable performance but Depp does not allow himself to be overshadowed by his illustrious co-star. Donnie Brasco lives a double life, as a shrewd law enforcer masquerading as a gangster and also as a trouble family man being consumed by intense dedication towards his work. While I enjoyed this film as a hugely entertaining crime caper, I also appreciated the way he managed to look convincing in both cases. While at home, he is troubled and rude to his wife but while with the gang he is sophisticated and manipulative.

While Donnie Brasco was a great success, it was his performance as the reckless father of gonzo journalism, Hunter S Thompson, in Fear and Loathing in Las Vegas (1998) that once again buttressed his position in the indie pantheon. With his bald patch, constantly drunken or doped stupor and sardonic voice over, Depp’s portrayal of Thompson remains one of his best acts till date, so much so that I found it very difficult to single out the actor from the character in most frames. Teaming up with a wonderful Benicio Del Toro, he tumbles as he walks, panics at the sight of hallucinatory bats or lizards and in general plays the perfect embodiment of the swinging 60s. But this voluntary anonymity was becoming gradually difficult to maintain with his increasing fame and popularity although he continued playing biographical roles in films such as Blow (2001), where he plays a real life smuggler. It was another delightful performance but things were becoming predictable for sure.

Depp finally changed his fortune with his first real box office triumph, Pirates of the Caribbean: The Curse of the Black Pearl (2003). It was another character where Depp immersed himself and played the morally ambiguous pirate to the hilt with quirky humour, colourful costumes and overt physicality. I remember when I first watched it I did not like it much. Someone told me that guy is called Johnny Depp and he is a great actor but I was not convinced (I actually watched previously mentioned films later on). Nevertheless, I have now come to appreciate the effort that has gone into creating the character of Jack Sparrow although I find his body language a bit similar to that of Klaus Kinski in Werner Herzog’s Aguirre: The Wrath of God (1972). Ironically, this also kick started the mass super stardom, excessive media glare and a resultant waning of the aura around him. The pirate franchise was stretched to three sequels, with consistent commercial success but gradually declining critical reception.

Nevertheless, in between this rising box office juggernaut, Depp also delivered Finding Neverland (2004), another biopic and a deep rooted character study of J M Barrie. It was a role that required remarkable restraint and underplaying, something that was polar opposite to his pirate act but Depp pulled it off effortlessly. In fact it was the first Depp film I’d seriously loved. Depp’s Barry is a man torn with the failure of his recent play and desperately in search of inspiration. He strikes a friendship with an attractive widow (Kate Winslet) and her kids. There is an understated tension and a hint of platonic relationship with her and a very warm bonding with the children just like a father. A classic work of art about another artist, Finding Neverland is another instance of Depp being at odds against the circumstances and society, in a more restrained manner but delivering a greater emotional high.

However, his routine collaborations with Burton were also getting gradually predictable although they never ceased to be amusing. Both Charlie and the Chocolate Factory (2005) as well as Alice in Wonderland (2010), had a feeling of déjà vu as far as Depp’s performances were concerned. Although the Mad Hatter was fleshed out from a one-dimensional character to one of the protagonists with significant thought and backstory, it still kept reminding of other Depp characters. But in between they did come up with Sweeney Todd: The Demon Barber of Fleet Street (2007), another testament of Depp’s versatility where he crooned his heart out while slashing away his customers with sharp razors. While his rough exterior was created with excessive layers of make-up, his singing added to the vulnerability and barrenness of his morose soul. The wronged barber seeking revenge is one of the most violent roles ever and also one of the most quirky even for his own standards.

This brings me back to Depp’s forthcoming film, The Rum Diaries. For the uninitiated, it will be his second film based on Hunter S Thompson’s autobiographical works after Fear and Loathing in Las Vegas, which is what makes it one of the most anticipated films for Depp fans. As a matter of fact, Depp was also a close personal friend of Thompson until his death. So, Depp seems to be the perfect person to play the role as he has already shown. This is what makes The Rum Diaries a film worth longing for. It is not a mere sequel to the previous film. It is another era and another location. So the question is, will it be able to recapture his indie glory of the 90s or will it fall short of expectations? One can only tell once the film releases. But the genuine Depp fans will only hope for the best.